Some years ago I read this blogpost on Barb's blog about the memorial quilt she made for her mother. Her mother died at the same age as my mother and also , like mine, of breast cancer.  Barb and I discussed in some emails how important such a quilt can be as a tribute to the beloved parent.

And then this year Marjo  offered me her already cut strips of Dutch traditional costume fabric in mourning colors.  The strips were too small for the purpose I had in mind so I said :no, I cannot use them.
Then there was another coincidence: I saw a picture of Jeanneke's quilt and immediately I knew: this will be the pattern for the memorial quilt for my parents.
So I mailed Marjo and asked for the strips and this is the result: 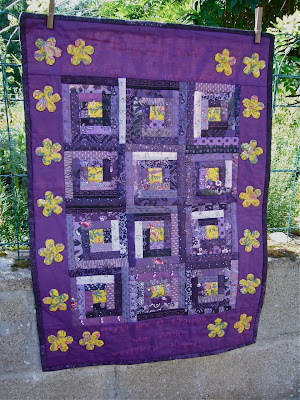 I used the strips in traditional mourning colors to make logcabins . My father was a nursery man and the small shed on his nursery was a very important place when I was young, it happened often that my mother, me and my brother went to my father's nursery to drink a cup of tea; We were sitting around the shed and we played around. Life was calm and peaceful..... there also were besides bushes a lot of flowers on his nursery. Both, my mother and my father loved to have some flowers on the table.
After his retirement my father had a vegetable and flowergarden till two years before his death.

I embroidered their names and for both of them  I added some important words which were the guiding motives in their lives .
For my mother those words were  'de heer is mijn herder' (the lord is my shepherd, psalm 23). 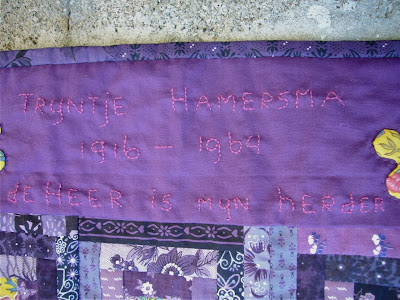 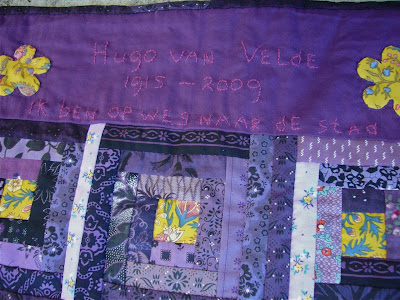