Happy New Year and do you want some origami paper cranes from France?

I wish you and your loved ones  good health and peace in 2012. Thank you for all your comments on my blog in 2011,  your friendship, and your inspiration.

I want to give you something in the beginning of this new year. On New Years Eve and today I have been folding origami paper cranes. I already have about 80 cranes.  Do you know the story of these Japanese paper cranes? 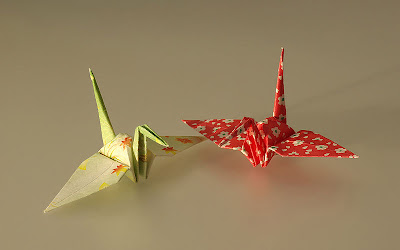 In Japan it is commonly said that folding 1000 paper cranes makes a person's wish come true.
A thousand paper cranes are traditionally given as a wedding present by the father , who is wishing a thousand years of happiness and prosperity upon the couple.

The thousand origami cranes was popularized through the story of Sadako Sasaki, a Japanese girl who was exposed to radiation from the atomic bombing in Hiroshima during the World War 11.
Sasaki soon developed leukemia and, inspired by the cranes legend, began making origami cranes with the goal of making one thousand. In a popular version of the story as told in the book about Sadako, she folded only 644 before her death; in her honor her friends completed the rest and buried them all with her.
In an alternate version of the story she completed the 1000canes before her death.

Sadako's short life has also inspired another sort of legacy: the Children's Peace Monument in Hiroshima. After Sadako's death , her classmates sought to ho,or their friend by creating a monument to mourn all the children who died from atomic bombing. 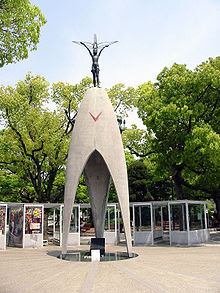 Beneath the pedestal , there is an inscription:

This is our cry. This is our prayer. For building peace in the world. 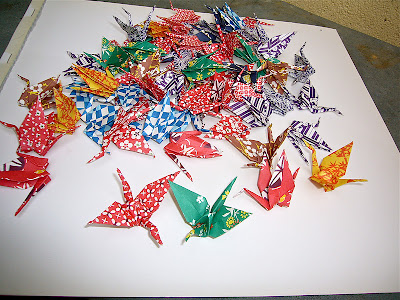