Grandmother's Flower Garden quilts bring to mind the Great Depression of the 1930's. We can imagine our own grandmothers busily sewing together one of these lovely quilts using scraps from her scrap basket. Such a quilt would be a cheerful reminder of colorful flower gardens; a much needed lift during hard times. This pattern had become very popular during the 1920s and continued to be a favorite for many years. 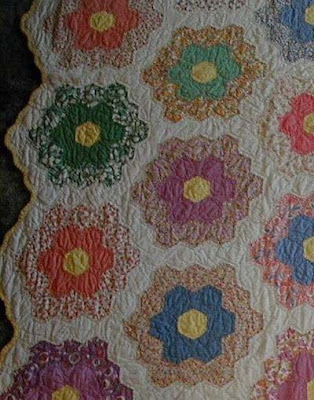 Hexagon quilt had roots in England as far back as the 18th century. Immigrants soon brought this pattern to America. Hexagon templates for these quilts have been found that were made around 1770. This leads historians to believe that the hexagon pattern might be one of the oldest pieced patterns.
The earliest known American made hexagon quilt is dated 1807 while an English hexagon quilt is dated even earlier. It's likely they were made for years before that time as quilts of this era were often not dated and few of the quilts made this early have survived to be enjoyed today. 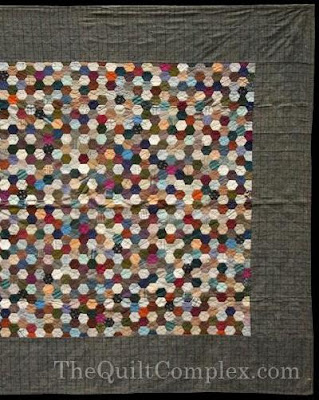 In the 19th century hexagon quilts were known as Mosaic quilts, Honeycomb quilts or Six Sided Patchwork. Barbara Brackman tells us, "The design sustained its popularity across the decades, changing from chintz to silk to wool to calicoes, first in brown cottons, then grays and then pastels."
Godey's Ladies Book, founded in 1830, published the hexagon pattern in 1835. It is thought to be the first pieced quilt pattern published in America. All things English were emulated by cultured American women during this period and making hexagon quilts was very popular in England. The article proclaimed, "Perhaps there is not patchwork that is prettier or more ingenious … than the hexagon or six sided: this is the

way the hexagons were arranged changed over the years. In her book that was published in 1929 Ruth Finley stated, " 'The Honeycomb', also a one-patch quilt, was made of hexagon patches sewed together without any attempt at color arrangement. But these six-sided patches were too suggestive of design not to invite experiment at the hand of the color-loving women who worked with them. Even the oldest tattered remnants of hexagon quilts show attempts at sorting and arrangement of colors. In time various more or less elaborate 'mosaic' patterns resulted." 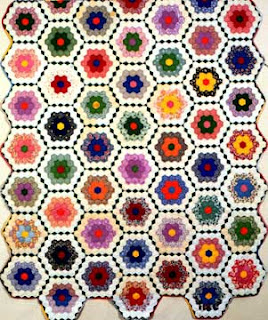 Collection of the Illinois State Museum, made in circa 1930

By the 20th century hexagon quilts were usually made in the Grandmother's Flower Garden pattern. These contained a center hexagon circled by six colorful printed or solid hexagons with another row of 12 hexagons around that. The centers were sometimes yellow to represent the flower's center. Between each flower was a row of colored solid hexagons to represent the background. A green background might have been the garden while white could have been a white picket fence.( read more about this quilt here) 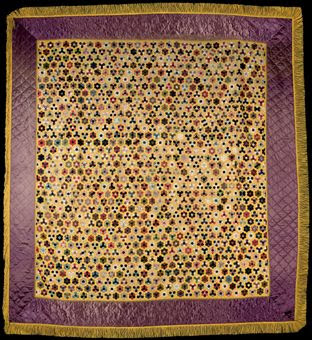